RIPPED OFF A4 specialist

VCDS Map User
Some of you already know about this guy...

turned out it had a whole load of problems just after me owning it water leaks starting problems ect ect.

He specialises in the a4s, now i find out

Just want others to be aware of him,he has many a4s for sale,good ones too,to good if you ask me.

He does seem to specialise a bit in A4 avants and most of the cars he has are at least 10 years old. Has he done anything to help you with the issues you have had?. He seems to have 100% positive feedback.

VCDS Map User
His feedback is 100% but it isnt from selling cars.

hes been not helpful at all.

[Edited to remove potentially defamatory comment that could leave you and the forum at risk of a civil action.]
Last edited by a moderator: Feb 27, 2015
A4 B6 Avant 1.9tdi Quattro avf stage2... Allard Egr Delete...Pipercross Filter... Decat
Bi-Xenon clear lenses Progress thread Here​

Id ring VOSA, they may inspect your car and take the matter further, ring trading standards and ring your local council office, complain to ebay too, raise a dispute, basically mix the *ooker a bottle.
No point in raising the issue if your going to let him dump all over you, harsh but true, good luck
NULL

It's good luck the seller didn't ring me back then, seems I would've gotten into a world of hassle!

VCDS Map User
TBH of all the things ive had to do,im tierd. car is still in bits.if the starting problem turns out to be a new head,il pursue it.as im not paying out anymore.

There is a point because i can steer people away from a situation that can be avoided.
A4 B6 Avant 1.9tdi Quattro avf stage2... Allard Egr Delete...Pipercross Filter... Decat
Bi-Xenon clear lenses Progress thread Here​

VCDS Map User
UPDATE this is the guy who i bought my car from,shocked or what!!!! 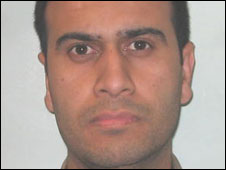 Hussain boasted he had been "ringing" cars since he was 14
A car-ringer who is believed to have pocketed more than £1m by shipping luxury vehicles stolen from Britain has been jailed for three-and-a-half years.

Shakeel Hussain, 33, admitted charges of fraud and handling stolen cars which he arranged to be shipped to owners in the Middle and Far East and Africa.

He conducted the "ringing" operation from his home in St Paul's Avenue, Slough, Berkshire, the court heard.

Hussain was sentenced at London's Southwark Crown Court on Wednesday.

His activities finally came to light when an undercover police officer, posing as a would-be customer, was told he could be supplied with stolen cars a third off their normal value.

This was sophisticated, this was intelligent and potentially it earned you a lot of money

Judge John Price
Hussain, who boasted he had been "ringing" cars since he was 14, told the detective he could send him as many as five cars a week through a Malaysian "front company".

Police bought a Mercedes and two BMWs from him before arresting the 33-year-old and searching his home where they found small metal Vehicle Identification Number (Vin) tags.

Ben Douglas-Jones, prosecuting, explained although they had a legitimate purpose, they were also invaluable when it came to giving stolen cars new identities.

He said officers also recovered thousands of documents and computer files. Other inquiries revealed £1.8m had passed through his personal bank account and £500,000 through a business account.

Judge John Price said: "These offences came to light because of the excellent undercover police work."

Det Sgt Malcolm Ellis, of the Met Police, said: "We realised the widespread scope of his enterprise only when we searched his house, and then discovered the vehicles he had been fed by various unidentified car thieves had come from all over the country."

Hussain pleaded guilty to eight counts of possessing articles for use of fraud and a similar number of handling stolen car offences between 26 March, 2005, and 9 November last year.

Jeez was NOT expecting that! Good job I stayed away although the car did look tempting!

VCDS Map User
I just hope my car hasnt been messed with,i did say he had some very low mileage cars with strange 1 p owners.ill have to get it checked by the police,ive contacted the investigating officer.

I could end up having it taken off me.

Holy smoke mate, what a *anker! Have your car checked out dude for peace of mind. Oh I *uckin hate thieving conniving **** ****'s!
NULL

VCDS Map User
im waiting to hear off the investigating officer. ive done all the checks it adds up.all numbers are there ect,engine number is the original too.

VCDS Map User
it will help me in court aswel if it turns out to be a new engine.
A4 B6 Avant 1.9tdi Quattro avf stage2... Allard Egr Delete...Pipercross Filter... Decat
Bi-Xenon clear lenses Progress thread Here​

Don't suppose you paid for the car with a credit card?
NULL

Like us all mate, brings out the "he's having my wrath". I'd end up getting locked up if some vile **** did that to me.
NULL
You must log in or register to reply here.

Cadbury or tesco ripping us off

Do you think I have been ripped off?

Cadbury or tesco ripping us off

Do you think I have been ripped off?