New Sportback version of popular Q5 plug-in hybrid launches with electric range-boosting battery upgrade that is also now benefiting other prominent TFSI e models
Part SUV, part coupé and now partly electrified – the new Q5 Sportback is the latest in an already long line of Audi models to adopt a plug-in hybrid TFSI e powertrain. The best-of-both-worlds versatility, with the environmental and financial benefits of zero local emission electric driving, but increased range, has been made possible by an increased capacity battery. This technology also comes to the Q5 TFSI e SUV and TFSI e versions of the A6 and A7 Sportback.

Common to all variants is a drivetrain combining an electric motor with a 2.0 TFSI petrol engine delivering 265 PS and 370 Nm (272.9 lb-ft) of torque. The permanently excited synchronous motor (PSM) with its 105 kW and 350 Nm (258.1 lb-ft) power and torque peaks is integrated into the seven-speed S tronic transmission, which channels output to a quattro drivetrain featuring ultra technology. In most situations, it supplies drive exclusively to the front wheels in the interest of efficiency, but the rear axle can be engaged predictively and in a split-second as required, ensuring that the advantages of quattro all-wheel drive are always available immediately when needed.

299 PS or 367 PS: the two output levels
Differences in the boost strategies networked into the two versions of the Q5 Sportback TFSI e determine their system output and system torque. The 50 TFSI e quattro with 299 PS and 450 Nm accelerates to 62mph from a standing start in 6.1 seconds, while the 55 TFSI e quattro with 367 PS and 500 Nm dispatches the sprint in 5.3 seconds. Both top out at an electronically limited top speed of 148mph, and depending on specification both are capable of returning economy figures ranging from 141.2 MPG to 156.9 MPG, which equates to CO2 output of between 42 and 45 g/km.

In both output formats, maximum torque is available from fractionally above idle speed, giving acceleration the impressive immediacy that is one of the many benefits of electrification. When the electric motor that makes this possible is operating alone, WLTP tests have confirmed that the plug-in hybrids can travel for up to 37 miles at speeds of up to 83mph.

In EV mode – the default setting which is active every time the vehicle is started – the Q5 Sportback TFSI e is powered exclusively electrically until the driver exceeds a perceptible pressure point in the accelerator pedal’s travel. Hybrid mode is activated automatically when route guidance by the navigation system is initiated, but it can also be selected manually via the operating mode button. In this mode, the battery charge is distributed optimally across the route in order to keep power consumption to a minimum. In Hold mode, battery capacity is held at the current level, and in Charge mode, the drive management system increases the amount of energy in the battery with the aid of the internal combustion engine. The electric engine then works as a generator, charging the drive battery.

The control function for the drive of the two plug-in hybrids is based on a large amount of data. This includes online traffic information, distance to the destination, the route profile of the chosen route, precise information about immediate surroundings from the navigation data, such as speed limits, types of roads, uphill and downhill slopes and the latest data from the on-board sensors. If route guidance is active in the MMI navigation system, the predictive operating strategy attempts to drive the last urban segment of the route purely electrically and to arrive at the destination or charging station with the drive battery nearly empty.

Convenient: fast charging in just a few hours
The Audi Q5 Sportback TFSI e models are supplied as standard with the Compact charging system comprising cables for household and industrial outlets plus a control unit. The integrated charger charges the lithium ion battery with a maximum power of 7.4 kW, meaning that at a household outlet an empty battery can be fully and conveniently recharged overnight in a little over eight hours. While on the road, the driver can also charge at public charging terminals with the standard mode 3 cable with a type 2 plug, and can streamline the process by making use of Audi’s proprietary e-tron Charging Service. It offers e-tron and TFSI e customers the opportunity to subscribe to one of two attractive fixed price charging tariffs, and to access a vast number of charge points operated by 18 suppliers across the UK and Europe using one RFID payment card.

Charge management from the couch: the myAudi app
Scheduling, and controlling, charging of the Q5 Sportback TFSI e models can be conveniently taken care of via a smartphone using the myAudi app, which grants remote access to the services from the internet-based Audi Connect portfolio. As well as enabling activation of the charging process and programming of the charge timer, the app also shows the battery and range status and the charge and consumption statistics. In addition, it features a route planner which factors in charging stations, as does the MMI navigation in the car.

Another useful feature of the myAudi app is its remote pre-entry climate control functionality, which enables the driver to determine exactly how the interior should be heated or cooled while the battery is being charged so that ahead of departure it reaches the temperature last set in the car. Pre-entry climate control even works when the car is not connected to the power grid, subject to a sufficient state of charge. The system can also be upgraded to include comfort remote preconditioning, which allows the driver to adjust the cabin temperature and activate seat, steering wheel and window heating, where this is specified, remotely from a handset. Administrator · 48 · From Oxfordshire
Staff member Administrator
You must log in or register to reply here.

Make your new car look like the concept car

Designed to mimic the introductory concept version of the E-Tron GT, the camouflage indoor car cover aims to reminisce the early stages of the four-door EV. With both the E-Tron GT and RS E-Tron...
Audi e-tron hybrid Lifestyle
Read More...

Like racing? Deep pockets? Good news - the RS3 LMS is on sale 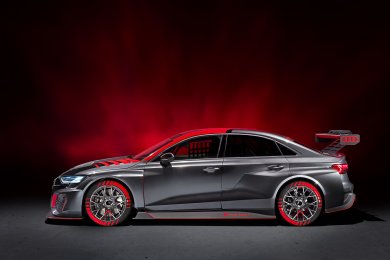 Audi has unveiled the first member of a new family of concept vehicles, a spectacular roadster. Audi skysphere concept is the name of the electric-powered, two-door convertible whose lines lead...
Audi News
Read More... 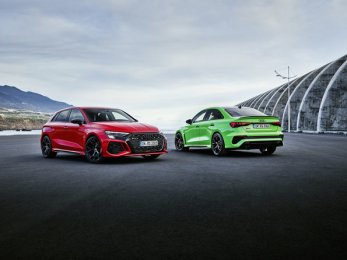 Both are high on horsepower, and the CAR Buyers Guide YouTube channel drag raced them to see which was quicker.

The Audi is at a disadvantage right off the bat. It’s not only about 200 kilograms...
Read More...
Top