This Audi knows when the light’s going to change (Review) 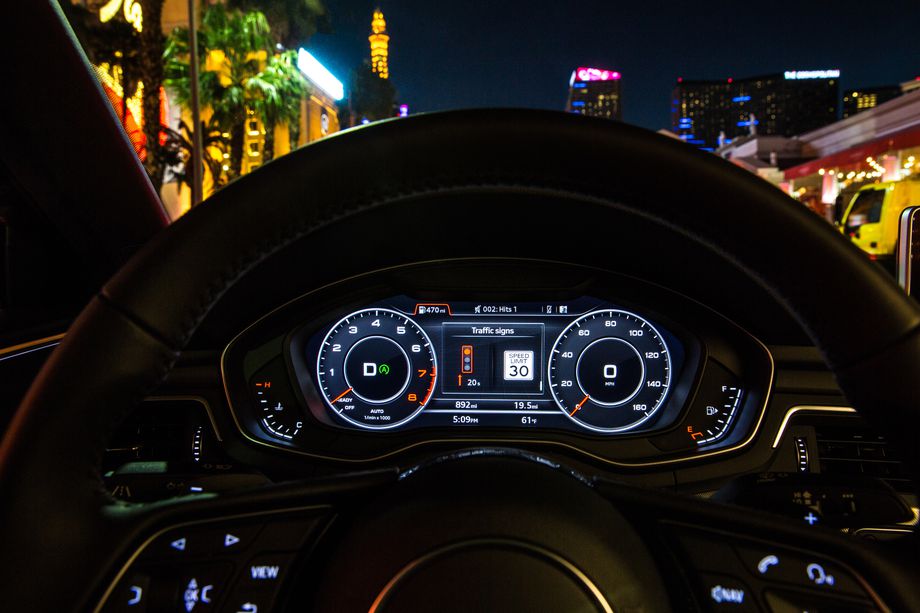 A red light can be a stressful affair. Idling at the intersection, waiting for the light to turn green, your brain reminds you that you would rather do anything else. But do you have time to check your phone? Remove your jacket? Pick your wallet up from off the floor? To shift your gaze away from the light risks angry honking, or worse, from the line of cars behind you. And so you stare at the red light for what feels like an eternity.

But as I drove an 2017 Audi A4 down the Las Vegas Strip, the seconds I usually spend waiting melted away. At each intersection, the car displayed a countdown clock of the seconds remaining before the light would turn green. It told me exactly how much time I had to check my phone, change the radio station, or gawk at the fountains outside the Bellagio. Suddenly one of the many minor stresses of driving a car had faded gently into the background.

This week Audi demonstrated the first working public example of what it calls vehicle-to-infrastructure (“V2I”) technology — a feature that lets Audi cars communicate with a municipal traffic system to make intelligent predictions about traffic conditions. The feature, which is available in Audi A4, Q7, and Allroad models manufactured after June 1st, is now available at most of the 1,300 traffic signals overseen by the Regional Transportation Commission of Southern Nevada. If you have one of these new Audis, you can try it in Las Vegas today.

Audi is a luxury brand, and having more time to yourself is a luxury few would turn down. The promise of V2I is that it gives you back the time you spend waiting at red lights by putting you in control. A minute here, a minute there — it adds up. And if you can’t get a lot done in that short window of time, at least the size of that window is no longer a mystery. (Also: you probably have enough time to look at your phone! Who doesn’t want to look at their phone?) To Audi, V2I is first and foremost a way to sell Audis: it brings a high-tech sheen to the boring old instrument panel, and helps upsell customers on the subscription packages required to access new features. (V2I is included as part of Audi Connect Prime, which costs $200 for six months of service.)


But V2I also heralds the arrival of an era where cars talk to cities, and vice versa, for the benefit of both. As more municipalities make real-time traffic data available, it will increasingly be available to you on your vehicle’s dashboard. Government officials who work in traffic management are optimistic that over time, technology like this can reduce congestion around town.

Audi rolled out V2I first in Las Vegas because it’s a newer city with more modern infrastructure than many of its American peers. It also benefits from tight regional integration among municipalities, making the technology easier to deploy across a large region. “We are a state that’s getting **** done,” says Angela Castro, senior director of government affairs for the Regional Transportation Commission of Southern Nevada. “We’re not faking it.”


Castro says the RTC began working to make real-time data available to auto manufacturers in the belief it will make roads safer and less congested. When enough drivers have access to V2I technology, she said, real-time data will identify better routes for drivers automatically (a la Waze) and alert them to accidents and other emergencies. Any auto manufacturer can apply to use the data Audi is using for V2I, she said — Audi was simply the first to do so. Automakers are racing to add features that give them the appearance of a tech edge — see also Cadillac, which will introduce “vehicle-to-vehicle” tech next year that attempts to improve road safety by broadcasting a car’s position to other cars, giving theme early warning about sudden stops and other dangers.

“You’ll come up to an intersection, you’ll see you have 60 seconds to wait before the light changes. Your face will relax, your shoulders will relax. Maybe you’ll even take your hands off the wheel. It allows you a little relaxation in the middle of your crazy day.”
Its eight lanes are congested day and night, and the traffic often moves at a crawl. If you plan on making a left turn, God help you: the lights are often timed to 2- or even 3-minute cycles.

It’s this last pain point that V2I is meant to ease. And so I slid into the Audi, adjusted my mirrors, and set out from Vegas’ Traffic Management Center onto the streets of Las Vegas.

In the A4, the traditional instrument panel is replaced with what Audi calls (deep sigh) “the virtual cockpit.” It’s a 12.3-inch digital display that by default shows you the traditional speedometer and tachometer — but changes in real time to highlight the current speed limit, vehicle information (your door is open!), and the navigation system.

When you’re in Las Vegas, the virtual cockpit is where you’ll find the V2I integration. As you approach a connected signal, you’ll see an illustration of a red light on the display, accompanied by a countdown counter. When the countdown is over, the virtual red light disappears from the display, and the actual traffic signal turns green. As I drove down the Strip, V2I offered reliable guidance at almost every light. Some signals still weren’t connected to the system — Audi says it does a quality assurance analysis of the predictions at every signal for bringing it online. But most of the signals I approached were connected, and Audi accurately displayed the time remaining before the light changed.

Here are some things I did while waiting for lights to change in Las Vegas: I checked my Twitter notifications. I took pictures with my iPhone camera. I recorded short video clips on Snapchat. I fiddled with the audio system. I watched the people walking up and down Las Vegas Boulevard. By the end of my roughly 25 minutes of driving, I was paying more attention to the red light on my dashboard than I was to the actual traffic signal.

For the most part, V2I struck me as a fun novelty. But I also found it somewhat distracting. The difference between a traditional instrument panel and a “virtual cockpit” is that the latter fairly demands your attention by virtue of the many streams of information it is constantly making available to you. It didn’t feel unsafe, exactly, but it did divide my attention between the road and the instrument panel, and it’s easy to see how that could go wrong.

It may be that the instrument panel is simply the wrong place for V2i information. Audi has integrated a basic heads-up display into the windshield into some models, and in time I can imagine seeing a countdown timer positioned on the windshield near the actual traffic signal. Today’s infotainment systems feel as if they are designed to take the driver’s eyes off the road as much as possible — and that’s a difficult trend to endorse, even when the information being provided is valuable.

Still, Audi’s first effort with V2I is designed to be used primarily while the vehicle isn’t moving. And in those moments, it worked as advertised nearly all of the time. Audi says it is currently in discussions with at least 10 other cities interested in bringing V2I to their roads. And when enough connected cars are on the road, it may be able to bypass municipal signals entirely by crowdsourcing the data, the company said. That could let the company roll out V2I to dozens more cities in a relatively short amount of time.

So often we hear about car technology only as a vague promise about a future benefit. The most interesting thing about V2I is that it’s available now — and it won’t be confined to Las Vegas, or to new Audis, for much longer.
Audi-sport.net Lanyards & Stickers
To find Audi-Sport-Net members with VCDS check out the MAP
For Audi-sport.net Small Events Click HERE
​

terminator x said:
Great tech but we won't be looking at our phones whilst awaiting the light change in the UK

Illegal in U.K. to use your phone when driving.

Could it be used to predict when they will turn red as well as green?
Audi c5 a6 1.8t Quattro met silver saloon,312mm front discs, remapped.

Samuel c5 Q said:
Could it be used to predict when they will turn red as well as green?
Click to expand...

Set the launch control up to go when the lights are green
#ShedWERX
2001 A3 1.8T Quattro Sport
^ Gone but not forgotten

Lavis89 said:
Set the launch control up to go when the lights are green
Click to expand...

That't me at every set of lights waiting for people trying to run amber/reds. Launch and aim for them. Sounds a bit psychotic but it just scares them and is food fun. The chances of actually hitting them is very small. Plus I'm in the Cordoba at the minute until I get the Quattro running.
Audi c5 a6 1.8t Quattro met silver saloon,312mm front discs, remapped.

Seat Cordoba Vario mk1 white, AHU 1.9 TDI with 0.205um nozzles and tuning box.
You must log in or register to reply here.

Know when it's time to hang up the Thong !!!

Anybody Know the back ground to this car?

Anyone going to the Nurburgring this year?

Anyone know how changing cars when on finance works?

Know when it's time to hang up the Thong !!!

Anybody Know the back ground to this car?

Anyone going to the Nurburgring this year?

Anyone know how changing cars when on finance works?