Yet another cam belt question!

I have read a few threads about the cam belt renewal on a 1.4 COD engine but I have just set up the 'MyAudi' app and it is particular to my vehicle. What confuses me is that certain items under 'additional work' on the app such as pollen filter/spark plugs/brake fluid and coolant pump drive belt give a mileage and time recommendation and a note says to change them whatever comes first. The timing belt only gives a mileage recommendation. Where does this 5 year recommendation to change the cam belt that I’ve been reading about come from if it’s not even mentioned in the app? This topic has been discussed at great length. Search the forum if you want to see chapter and verse, but in a nutshell Audi Germany (the manufacturer) is responsible for the handbook and MyAudi, and does not give any time limit for cam belt changes. Indeed, when the 1.4tfsi EA211 engine was introduced they made a big play about the special can belt essentially lasting the life of the car. However, they leave it up to individual countries to make their own recommendations, and Audi UK, with no real justification, introduced the 5 year change interval. No other European Audi organisation has done this.
2017 MY Sportback Sport 1.4 TFSi 150hp CoD. Comfort pack. Folding door mirrors. Audi Sound System. SD card satnav. Hold Assist. Park Plus. F/R mudflaps. Dashcam.

Thanks. I'll only have about 40k on the clock when it’s 5 years old so I’ll see how brave I feel!

What are others doing on here - anyone ignored the 5 year recommendation and lived to regret it?
L

Gonna be an expensive time for me if I change them both at 5 years. Ones for 22k on it and the other 36k

Knowing what Audi GmbH have said I might wait a bit longer.

Steve D said:
Thanks. I'll only have about 40k on the clock when it’s 5 years old so I’ll see how brave I feel!

What are others doing on here - anyone ignored the 5 year recommendation and lived to regret it?
Click to expand...

Mine is currently 7 1/2 years old and 60,000 miles, and I haven't changed the belt. As already said, they made a thing about the belt effectively never needing replacing when they launched the engine, the handbook and My Audi (ie everything under the control of Audi HQ) still have no time limit, and only Audi UK have said 5 years.

Personally I'm going with what the manufacturer says, and I'm gambling on this 5 year thing just being Audi UK wanting more money for their dealers every 5 years, and so am ignoring it. Just like I ignore the Audi UK's "regas air con every 2 years" requirement, having had that done once, last year, when it stopped being quite as cold and started making a new fluid noise instead.

Everything that is in the official service schedule I do as and when it says, every time.

I may or may not get the cambelt changed at 10 years - wait and see how I'm feeling about it then!

Obviously it's all a risk/reward trade off, and my one example of having been fine so far is proof of nothing, but there is also the risk of them messing something up to throw into the risk/reward balance, as well as the cost of getting it done.
A

Not had timing belt changed yet. Likely take it to the main dealer for £600.... but as others have read it supposed to last the lifetime of the engine? To be fair the Audi seems a bit cheapo underneath so Audi may be thinking its scrap at 60,000 miles? Some parts shared with Mk5 golf..

Looking at it as well as searching around on the 'net, it doesn’t look particularly hard to do. One VW independent specialist I’ve seen doesn’t seem to have even used any specialist tools as the cam and crank pulleys are dabbed up with tippex. (See pictures below). I can buy the timing tool kit for around £40 and a gates belt kit with tensioner and guide pulley is around £60. If I decide to do it in November, I’ll photograph it and do a write up. It appears to have a free running crank pulley so it should be no different to do compared to a Ford Zetec. 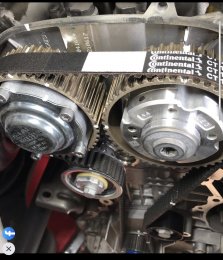 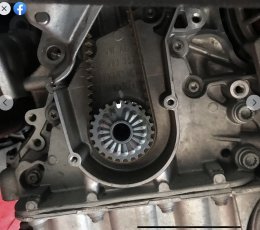 I don’t really get why some professional garages do this as it seems a shortcut.

All it does is ensure everything is in the same position as before, not necessarily the right position. If it was out before, this won’t fix that.
VCDS owner - Money donated to Hampshire & Isle of Wight Air Ambulance.
L

Benefit of the smaller engine is more room to do it as well. The 2.0tdi are a right gaff going through wheel area and undoing engine mounts. Right pain in the a$$

I also have low mileage (37K) and 6 years now. May get the belt replaced by an Audi indi next year.

Of course not only is there the risk/worry of the belt failing if you don't replace it, but also the risk of the work being screwed up (by a garage or DIY approach) having done something which Audi Germany consider quite unnecessary and don't actually recommend you do ;-)

Also well out of warranty, so it's not as if not doing it will compromise Audi UK warranty, which is the common reason for sticking to their 'rules'.
Last edited: Mar 5, 2021
2015 Glacier White A3 S-line Sportback 2-door 1.4 TFSI 150 COD Ultra 6-speed

All I see everywhere is talk of when the belt should be replaced... Out of interest, what's the prevalence of actual timing belt failures for this engine reported on this forum? And what was the mileage & age of those that failed?
2015 Glacier White A3 S-line Sportback 2-door 1.4 TFSI 150 COD Ultra 6-speed
M

I have two very low mileage cars with 1.4tfsi COD engines coming up to 5 years old later this year. My personal decision is to follow the manufacturers guidance and leave the cam belts well alone for a few more years. What I will be doing, however, is visually checking the belts every year or so, which may give some indication of any impending problem. There is an issue regarding selling the cars on, in that prospective purchasers may be concerned about the age of the belts. So it may be a case of either taking a hit on the resale value, or paying out ahead of the sale for a (uneccessary?) belt change.
2017 MY Sportback Sport 1.4 TFSi 150hp CoD. Comfort pack. Folding door mirrors. Audi Sound System. SD card satnav. Hold Assist. Park Plus. F/R mudflaps. Dashcam.

Mikeso51 said:
What I will be doing, however, is visually checking the belts every year or so, which may give some indication of any impending problem.
Click to expand...

You may spot something visually, but I've read (and can't find where now) that belt degradation, when it occurs, can take place internally so it 'looks ok' from the outside visually. Also that most strain takes place when starting the engine rather than at, say, high RPM. Perhaps that's because the belt has to turn over a relatively un-lubricated cam at that point?
Last edited: Mar 5, 2021
2015 Glacier White A3 S-line Sportback 2-door 1.4 TFSI 150 COD Ultra 6-speed

yes, I agree that a visual check is by no means conclusive , but an annual check for damage, cracks etc takes very little time and is better than nothing. And it’s something the dealer never does,

Incidentally, whilst I haven’t been checking closely, the only mention that I’ve seen on the forum of a cambelt failure was immediately after the main dealer changed the belt. The dealer apparently paid for a new short engine
2017 MY Sportback Sport 1.4 TFSi 150hp CoD. Comfort pack. Folding door mirrors. Audi Sound System. SD card satnav. Hold Assist. Park Plus. F/R mudflaps. Dashcam.

J
Yet another payment question....
2

yet another warranty question. sorry!

C
Yet another countdown!

Yet another stolen S3...

J
Yet another payment question....
2

yet another warranty question. sorry!

C
Yet another countdown!

Yet another stolen S3...